It is the time after the Brothers' War. The destructive power of the Sylex blew debris into the air miles high. The sun is blotted out by huge dust storms, and the air is getting colder by the day. An overzealous church comes to power in the aftermath and starts a backlash against magic and magic users. The woes of the world, the church claims, can be blamed on those who channel the power of mana, and wizards become hunted like wild animals. Only those with enough power and the smarts to go underground with their studies continue to practice the outlawed arcane arts. Two secret schools of magic were fabled to exist. On the east, the City Of Shadows. On the west, the Conclave of Mages. No ordinary people can find these locations, and some claim they were simply stories made up by the superstitious. But the art of magic made it through this dark time, even in the face of the oppressive church. Some of the very powerful live on from that time in Dominaria still, and they can attest to the bravery of the mages who protected the art of magic in the period of The Dark. 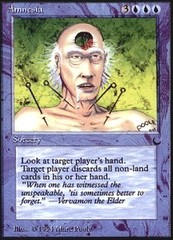 Use arrow keys to navigate.
View Details
Amnesia
The Dark
No conditions in stock. $3.42 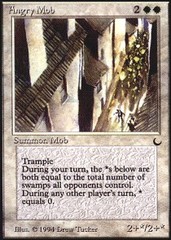 Use arrow keys to navigate.
View Details
Angry Mob
The Dark
No conditions in stock. $1.75 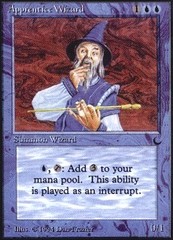 Use arrow keys to navigate.
View Details
Apprentice Wizard
The Dark
No conditions in stock. $8.31 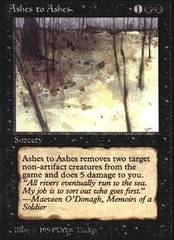